Team NAVIGATE
Our Progress
After forming our team at the end of Spring 2012, our team split up into three main supgroups, software, hardware, and human interface, so as to separately and thoroughly address all of the obstacles that may face our team.

Software
Our software subgroup initially took on the task of researching various devices that could be used for 3D imaging. Ultimately we decided that the Microsoft Kinect would be the most feasible device to use for obstacle detection in indoor environments. Having settled this, we began to look into which algorithms would best be used to detect and recognize objects as well as algorithms for path determination. Having implemented Dr. Felzenszwalb's and Dr. Hoiem's code on RGB images for object and path detection respectively, we moved onto developing code for algorithms that utilize the Kinect's 3D imaging capabilities. Having implemented planar detection and classification (i.e. walls and floors), we have determined obstacle locations and will provide feedback to the user to navigate around them. 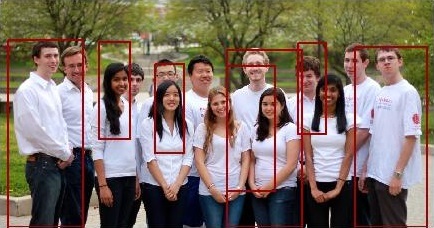 Hardware
Initially the hardware subgroup worked on the design and creation of a device that would allow for mounting of our device on the blind user. Ultimately we settled on a go-pro strap that allows for the Kinect to stay steady on the user's chest. By running the Kinect directly off a battery and connecting it to the Windows Tablet, we have achieved device portability. We have also setup our directional haptic feedback system by mounting vibration motors on both sides of the go-pro mount and communicating with the tablet via Bluetooth.

Human Interface
Having achieved IRB approval midway through the Spring 2013 semester, we have interviewed several members of the blind community as well as with certain sighted individuals who have spent significant amounts of time with the blind. From these interviews we determined several preferences the blind community would have for our device. From these interviews we determined, that the best form of feedback would be haptic or tactile with some minimal auditory feedback.
Having conducted these interviews, this subgroup has moved onto designing an obstacle course that will properly gauge the success of our device in facilitating blind navigation.